Photo by Benjamin Grull on Unsplash

There’s a fairly modest community of people who maintain that Jesus was actually a mythical figure. They believe that the Gospel writers borrowed traits from other mythical figures and re-appropriated them for their own cult-like purposes. These ideas have zero currency amongst historians, Biblical scholars, and other academics, but I don’t think it’s always clear why so I thought I’d try and offer some perspective[1].

Firstly, it’s because the idea of whether Jesus was mythical or real isn’t particularly interesting. It’s widely speculative, which means no matter how hard you examine the source material you’re not going to find conclusive evidence in favour of the argument. (You will find evidence that Jesus was historical, which I’ll get into later, and which requires a certain amount of mental gymnastics to dismiss.) And it lacks explanatory power – it doesn’t solve any problems we have with the Jesus story, except for the resurrection problem, but it raises plenty of its own[3]. This makes for a poor foundation on which to establish further scholarship when there are plenty of other more fruitful leads to follow up.

Secondly, it’s because there’s nothing unusual about a historical Jesus. Jesus lived in a time of simmering tensions between Judeans and the occupying Romans, which ultimately culminated in the destruction of the Second Temple in 70 CE (a loss that is still keenly felt by Jews living today). Herod, who ruled Judea as a tyrant, had been appointed as a vassal king by the Romans in 37 BCE. Ascetics (i.e. monk-like wanderers) preached and baptised people outside the influence of the three main Jewish sects (Sadducees, Pharisees and Essenes) which dominated Judean political and religious life. As such, there was both political and religious appetite for a Messiah – a king who would unite the tribes of Israel under a politically-independent kingdom and a temple unmolested by schisms and competing factions [4].

Essentially, people like Jesus were fairly thick on the ground: preachers who argued the finer points of Hebrew scripture with Sadducees and Pharisees, who tried not to advertise their revolutionary intent too loudly for fear of Roman retribution (see: the Messianic Secret), and who quickly faded into ignominy after they failed to gather more than a scattering of adherents (correspondingly, we only even know of them because they were chronicled by the Roman convert Josephus). It’s a pure accident of history that Jesus’s movement had any traction outside Judea – but all that action happened after his lifetime anyway.

Thirdly, with regards to ancient history, you pretty much have to take what you can get. It is the rule, not the exception, that your sources are written decades or centuries after the event in question, by people harbouring their own political or social biases, which have survived because they were curated, quoted and preserved by later third parties, and which are often rife with fanciful or supernatural claims. They often contradict each other, are silent on matters you would expect them to discuss, focus too closely on incidents that didn’t end up having much impact, and gradually fall in and out of favour as either sources come to light. This is why historians have perfected the art of reading their sources ‘against the grain’ – i.e., being very careful not to take them at face value and focusing on what the author was trying to convince their audience of and, from there, triangulating what the actual truth of the matter was. Suffice to say, it’s more of an art than a science, but then most investigative work is.

With that in mind, the sources we have for a historical Jesus are actually pretty good. We have thirteen letters attributed to Paul (seven of which he certainly wrote, the others being epigraphical), the first of which would have been written about fifteen years after Jesus died. In these letters Paul doesn’t give us a biography of Jesus, but this counts in favour of their authenticity: he was writing to communities in which people would have already been familiar with Jesus's biography, and so there was no need for him to waste time on it when there were ecumenical matters to discuss. And where Paul makes asides about Jesus he appears to be describing someone who lived and breathed – he references meetings with Jesus’s literal brother James, for example, along with some of the original disciples.

Likewise, the Gospels don’t present an impossible challenge for historians, despite their supernatural content. The gospel attributed to Mark (gMark) was likely written around 70 CE (it references the destruction of the Second Temple) which is not an unusually long time after Jesus died. The gLuke and gMatthew gospels used gMark as one of their sources, and similarities between these gospels suggest they also had another source in common (the Q source). This indicates that, although they came along later than gMark, they relied upon earlier written sources which wouldn’t have been too far removed from the time when Jesus was living and preaching.

Between the Pauline letters, gMark and Q, that gives us three independent traditions which testify to the literal existence of a historical Jesus. We likewise have Josephus and a smattering of non-Christian sources which indicate that there was a belief in a historical person called Jesus rather than a mythological tradition (Pliny the Younger, Suetonius, Tacitus, etc.)[5]. This makes Jesus the most well-attested Judean of his century, at least outside of political leadership.

Fourthly, we have to beware of taking an exceptional approach to the idea of a historical Jesus. We can poke at all the sources we have for his literal existence, and disregard all the circumstantial evidence, but if we are doing so because we wanted to set out to disprove his existence then we are acting in bad faith and establishing an impractical precedent. Impractical, because we would then have to take the same approach to every person in antiquity who isn’t attested to by any archaeological evidence. And that would leave us with not very much.

In his account of the Persian expedition, for example, Xenophon describes his army moving through Armenian territory when one of his soldiers, a former slave, explains that he recognises the local speech and thinks he was abducted from this country as a child. If we are to doubt the literal existence of Jesus, then we must also conclude that this soldier was invented by Xenophon. We must conclude that anyone who didn’t have their name carved in the stone of a temple, wall or fort is a literary construct invented for devious purposes. This would deny us thousands of historical figures who are attested in only one or two sources.

Basically, historians believe Jesus existed because they apply a consistent metric when trying to determine what is history and what is myth when studying the ancient past, and by that metric Jesus passes as a real human. There is room for doubt, but that doubt doesn’t lead us to very interesting conclusions or interpretations, and that doubt is best reserved for more specific claims (i.e. the claim that Jesus was born in Bethlehem, or that Jesus was resurrected from the dead by supernatural means, which the historical consensus is not in favour of). And those who argue otherwise are frequently in engaging in bad faith, indulging in unconvincing scholarship, or, most often, failing to properly understand the strengths and limitations of the historical method.

[1]: There was the 19th Century anthropologist Sir James Frazer, whose multi-volume work, The Golden Bough, attempted to demonstrate that all the old religions were founded on the idea of a dying-and-rising god. In this work, he drew parallels between such mythical figures as Osiris, Adonis, Dionysus and the Jesus narrative. Massively influential in his time, his ideas have been long discredited in anthropology, largely for being too speculative and too reliant on misinterpretation or cherry-picked details.

Of the living, there is Robert M Price, an accomplished Biblical scholar who is the most respected proponent of the Jesus Myth hypothesis. However, he is a bit of a known contrarian (he believes many of Paul’s letters to be interpolations, and believes the gnostics came along before the Christians, both ideas that go against the academic consensus) and he always gives himself a backdoor when talking about the ‘Jesus Myth’ – i.e., claims he has no personal stakes in whether Jesus was historical or not and just believes the alternative idea should be given equal treatment. His podcast (Bible Geek) is worth checking out though.

And there is Richard Carrier about whom the less said the better. He has a PhD in ancient history, but he has not been published in academic journals since he obtained it nor won a position on any history faculty. He has published a few books, but for a pseudo-academic publisher which prides itself of presenting contrarian works.

[2]: Not all of them. Some will contend that no amount of historical scholarship will lead you to the definitive conclusion that there was a resurrection, and will say that this is only their personal belief. Some will conclude that the historical evidence indicates that it must have happened. Most are in the middle somewhere.

[3]: A quick aside on the resurrection problem: it is fairly clear that Jesus’s followers believed that Jesus had been resurrected. Christian Biblical scholars will tend to argue that the resurrection therefore must have occurred[2]. But historians and non-Christian Biblical scholars are left to convincingly explain why his followers believed this without invoking any supernatural intervention: whether it was based on confusion and rumour, after-the-fact invention, grief-induced hallucination, mass hysteria, etc. But if Jesus was a mythical character then there’s no resurrection problem to contend with in the first place – it was just all part of the story.

[4]: As a child, I was always told that Jesus was the promised Messiah, and that Jews simply failed to recognise him as their saviour. Jews would take a dim view of this interpretation, mostly because the story of Jesus doesn’t fit the Messiah prophecy even remotely. 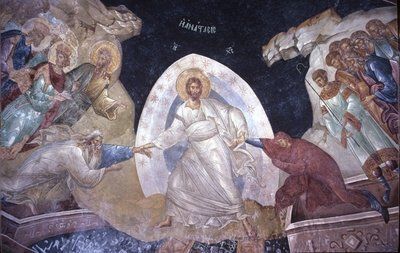