There was a lunar eclipse this morning and, by coincidence, Mars happens to be as close to earth as it's going to be for about thirty years. This offered a unique opportunity to capture both red objects in the sky at once, which I largely failed to do because I don't have the equipment or experience for lunar photography.

Since starting with this project, though, I have been trying to get out when the nights are clear to try and get an appreciation of how the stars move about the sky. I've had a lot of luck with the Sky Guide app, which is basically everything I've always wanted in an astronomical guide: it makes it pretty painless to identify the various stars, planets and constellations in the night sky.

More importantly, it provides an excellent visual demonstration of the eliptic plane, or the Zodiac, and how it lies across the sky. In the above image, for example, you can see how the moon sits on the eliptic plane, creating a neat perpendicular with Mars. Seeing these two bodies sit so snugly together was, for me, just as interesting as catching the eclipse. (It was particularly amazing to see just how bright and large Mars looks to the naked eye right now.)

Anyway, to compensate for my lack of photography skills, here's a picture of the lunar eclipse taken by my friend Tim Sheehan. He managed the shot with the aid of a 700mm telescope and a $10 adapter ring he found on eBay. 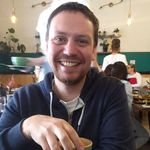